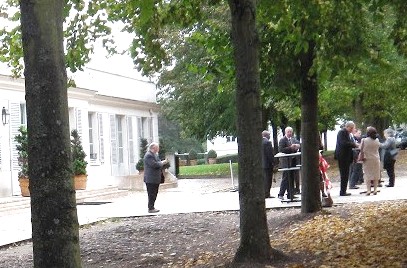 On 13-14 October, 2015, the International Bureau of Weights and Measures (BIPM) held the annual meeting of Directors of National Metrology Institutes and representatives of governments - signatories to the Mutual recognition of national measurement standards and calibration and measurement certificates issued by NMIs (CIPM MRA) - a key element in the international infrastructure assuring the quality of measurements. The CIPM MRA was signed in 1999 to provide governments and national authorities with a reliable technical basis for easy cooperation in international trade and in other fields. VNIIM was represented at the meeting by the Deputy Director for International Cooperation, Yuri A. Kustikov.

An objective of this meeting was to organize a broad discussion of burning issues concerning implementation and improvement of the CIPM MRA among the NMI Directors, representatives of the countries who signed the Metre Convention and Associated Members of the General Conference of Weights and Measures (CGPM), Regional Metrology Organizations (RMOs) and other interested communities. The meeting discussed the success of the CIPM MRA and proposals for its improvement. To perfect the Mutual Arrangement and to improve its implementation a special Working Group was established under the chairmanship of the President of the International Committee of Weights and Measures (CIPM), which includes representatives RMOs, NMIs and the CIPM Consultative Committees. The objective of the Working Group is to review and summarize the results of international discussions about the CIPM MRA aimed at assuring its sustainability. It is expected that concrete proposals will be prepared by March 2016.