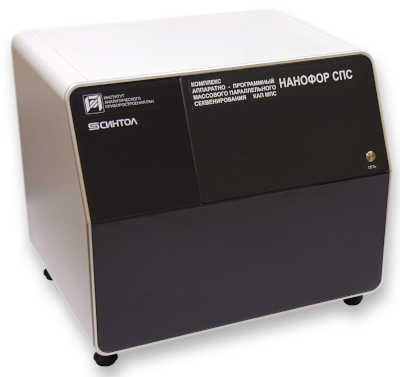 A State testing of the first home-made whole-genome DNA sequencing machine Nanofor SPS has been recently completed at VNIIM and recognized successful. Its hard- and software were developed by the Institute of Analytical Instrumentation of the Russian Academy of Sciences (RAS). The reagents were prepared by the Syntol Research and Production Company.

The device is based on the PCR Colony method engineered by the RAS 30 years ago. At the present stage the method is realized to be used domestically as a technology for the massive parallel DNA sequencing (MPS).

The main technical feature of this setup that distinguishes it from its foreign analogues is its unique optical detector that provides a better sensitivity. The set of reagents realizing the principle of sequencing by synthesis also implements a number of know-hows which provides a longer length of reading of mapped DNA sequences than its analogues, which is extremely important for a number of applications, especially in the field of personalized medicine.

The Deputy Head of Rosstandart Mr S. Golubev pointed out that the home-made equipment and reagents will make sequencing technologies more accessible and will help bring medical and epidemiological research to a new level. Development of domestic instrumental and reagent base for genetic research requires development of reference materials and reference methods designed to ensure metrological traceability of measurement results.

The testing was carried out in several stages and ended with mapping and assembly of the DNA of a microorganism that is pathogenic for humans - Mycobacterium tuberculosis, provided by the Federal Research and Clinical Center of Physical-Chemical Medicine (FMBA). The test results confirmed the full compliance of the ingenious Russian setup, reagents and the MPS software with the advanced foreign analogues.

The Head of the D.I. Mendeleyev Institute for Metrology, Mr A. Pronin, mentioned that the first step towards creating the corresponding metrological infrastructure should be inclusion of nucleotide sequence as a non-system unit in the Regulations on measurement units allowed for the use in the Russian Federation. Serial production of the device and reagents is planned to be launched in 2021 at the RAS’ Experimental Factory of Scientific Engineering located in the town of Chernogolovka.